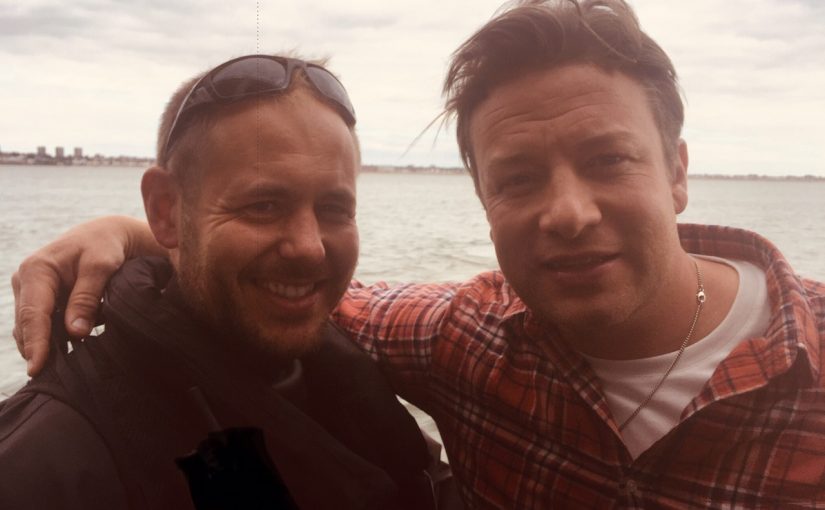 It was about three years ago when I started doing my dyslexic blogs and pod casts with comedian Mark Simmons. For me at the time it did not matter whether people read or listened to it (other than my mum of course) because i was just doing for me. I guess it was a way of putting pen to paper or pressing record and just getting stuff of my chest and putting them out there in a notional black whole that maybe one day some one may dip into.

However it surprised me when people started to comment on them and started to engage feeding back there stories. It soon turned out that I was not the only one that was forced to wear coloured glasses and eye patches and being placed in classes branded as special needs. It made me feel better in myself that i was not the only one who was going through this.

So from that i decided to write to my dyslexic man crush, jamie Oliver! Why wouldn’t he be anyones man crush, he is driven, successful, focused, you could taking him home to your mum and you would not go hungry!!!

I sat down at my table, wrote a load of my experiences growing up and asked how he copped with dyslexia during his early years. I placed the hand write letter (and i hate writing by hand!) in the envelope, addressed to to his agent, posted it and 6 months later…… i never heard anything!

I knew no one would reply i guess i just wrote it because it felt good sending it and it gave me that opportunity to think not only about me but how someone else felt.

Anyway I now work in the maritime world off the Kent and Essex coast. Whilst on the water on our 7 meter rib we needed to stop in Southend for a quick comfort break. We moored up on the end of the pier and headed over to the toilet block. There is a little blue building which i always knew was linked to Jamie Oliver and where he films one of his shows. Every time we had been before it had always been shut and empty however this time it was full of activity. Lights set up outside, cameras pointing in all directions and about a 40 strong film crew.

Im looking at my mate Ron thinking I’m no expert but i think something is going down!! We walked over to the little blue hut and spoke to one of the staff members. They confirmed that he was filming so I asked if he would be interested in having a look at our boat (may have come across as a bit of an unintentional chat up line). she informed me that he wold love to if he knew but the filming shedual was very tight and basically said he had no time in a polite manner.

tail between our legs we walked back to the boat which I would also like to add was on our lunch break. As we were just about to walk past where the film crew were based  randomly he walked out of the entrance door. Now as much as seeing my wife walk down the isle on our wedding day gave me butterflies I have to say that this moment I did get a few buzzing around my stomach  making me a little speechless.

Of course i composed myself, prosessed the situation by thinking before speaking and then came out with “fancy looking at my boat!’ To which he said “why not”. His assistant said no to him highlighting that he had no time to which he came along anyway and spend about 15 minuets chatting.

I thought back to that letter i send him three years ago and strongly the first thing that I came out with way “I wrote to you but you never wrote back’ in a jokey way. He actually asked where i sent it and joked that some times letters turn up at his address that only have his name on it and a stamp!

Following that I explained the reasoning for sending the letter that I knew he was dyslexic. From there we had a quick but amazing chat which gave me a short insight into his dyslexic world.

He worked out that he was about ten years older then me and said that when he was younger there was no real help at all. He stated that back then you got isolated from the main classes and did more smaller group work. I mentioned that I was put in a class called “special needs” to which he smiled and said that was exactly what it was called when he went to school.

I said that for me one of my main problems at work was spelling the wrong word for example putting on a form that someone was retarded when I actually awas trying to say retaired but my brain reads them the same so I get messily into trouble with that. He told me that in one of his books he was trying to write the word pancetta and actually wrote placenta with out noticing! Just shows that it doesn’t matter who you are, whether you are a multi million pound chef or just a small time blogger whose mum makes up 85% of your target audience, the dyslexic problems are still the same!

We spoke briefly about coping mecineisms – he stated that he uses a dictaphone regally which is something that I have never used or tried.

It was a very brief chat but what I would say is he is a really nice bloke and was really down to earth and open regarding dyslexia. A lot of people i know try to hide it as if it is a bad thing. It really isn’t! If anything I’m sure Jamies dyslexia may have played some part in his success today.